Landlords with questions about their obligations under state and federal law should consult with an attorney prior to taking any action to terminate a tenancy. 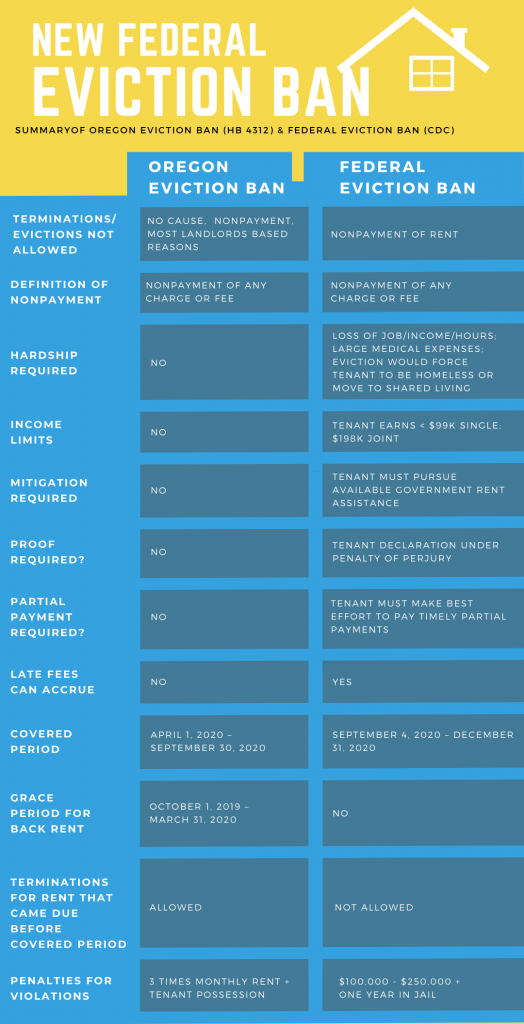 Can I Issue a “No Cause” Termination Under the Federal Ban?
The federal ban does not speak directly to no cause evictions but does state that it does not prevent evictions for reasons other than nonpayment.  However, given the substantial penalties landlords should tread carefully.  If and when no cause evictions are allowed again under Oregon law (October 1, for tenancies that are still within the first year or that were within the first year during the Emergency Period, assuming no extension of the Oregon eviction ban) landlords should consult with an attorney before issuing a no cause notice.  If a landlord were to issue a no cause notice, it would need to be clear that it was not pretextual for a nonpayment termination.

Are “For Cause” Terminations Allowed?
Yes.  Under both the Oregon and federal ban, landlords can evict for tenant-cause or material violations of the lease agreement if the tenant-cause or violation was not nonpayment of rent or other charges.  However, “qualifying landlord reason” terminations (demolition, conversion, remodeling, landlord or family member moving in) are not allowed under Oregon law except for sale of home to a person moving in as a primary residence.

Tenant failed to pay rent for a month between and including April – September 2020
Landlord not allowed to terminate under Oregon law until March 31, 2020 (end of the grace period).

Tenant fails to pay rent for a month between and including October – December
Landlord would have been able to terminate under Oregon law but now cannot terminate under federal moratorium until after December 31, 2020.

Tenant fails to pay rent for a month after December 2020
Landlord can terminate under both Oregon and federal moratorium.