Salem, Oregon (October 18, 2019) –Property located within a half mile of Eugene’s public transit system is worth 24% more than similar properties not in close proximity to public transportation, according to a joint report released Monday by the National Association of Realtors®and the American Public Transportation Association.

The document, which examined the impact of public transportation on real estate property in seven markets across the country, was unveiled at APTA’s TRANSform conference in New York City. Eugene is featured in the report along with Boston, MA; Hartford, CT; Los Angeles, CA; Minneapolis-St. Paul, MN; Phoenix, AZ; and Seattle, WA.

Rents in Eugene are 13% higher at residential properties located near public transportation, the study found, while a total of 94,364 jobs were recorded within a 30-minute commute of Eugene’s transit systems.These households also spend $2,517 less on transportation each year than other households in the region, on average.

In Eugene, the median sales price of residential properties within a half-mile of the BRT line increased by 49 percent from 2012 to 2016, the study found.Prices in non-transit areas and the region also increased, but at a slower pace, 25 percent and 27 percent, respectively. NAR and APTA also reported that 3 station areas witnessed price increases over 2,000 percent: High Street Station in Eugene, and Glenwood and Lexington stations in Springfield.

“Access to public transportation is a hugely valuable community amenity that increases the functionality and attractiveness of neighborhoods, making nearby communities more desirable places to live, work and raise a family,” said NAR President John Smaby, a second-generation Realtor®from Edina, Minnesota. “The results of our report, conducted over multiple years alongside the American Public Transportation Association, should reiterate to policymakers at all levels of government the importance of investing in modern, efficient infrastructure that facilitates growth and helps our nation keep pace in a rapidly evolving world.”

Nationally, APTA and NAR’s study found that median sales prices of homes near public transportation were 4% to 24% more valuable than similar homes in the regions surveyed. In addition, one in three households near transit reported not owning a vehicle while all households near transit spent between $2,500 and $4,400 less annually on transportation.

This study compared the performance of residential and commercial property sales near fixed-guideway stations with areas without public transit access between 2012 and 2016 in the seven regions served by light rail, commuter rail and/or bus rapid transit. The regions were chosen intentionally to represent small, medium and large regions.

Most notably for Eugene, the report found: 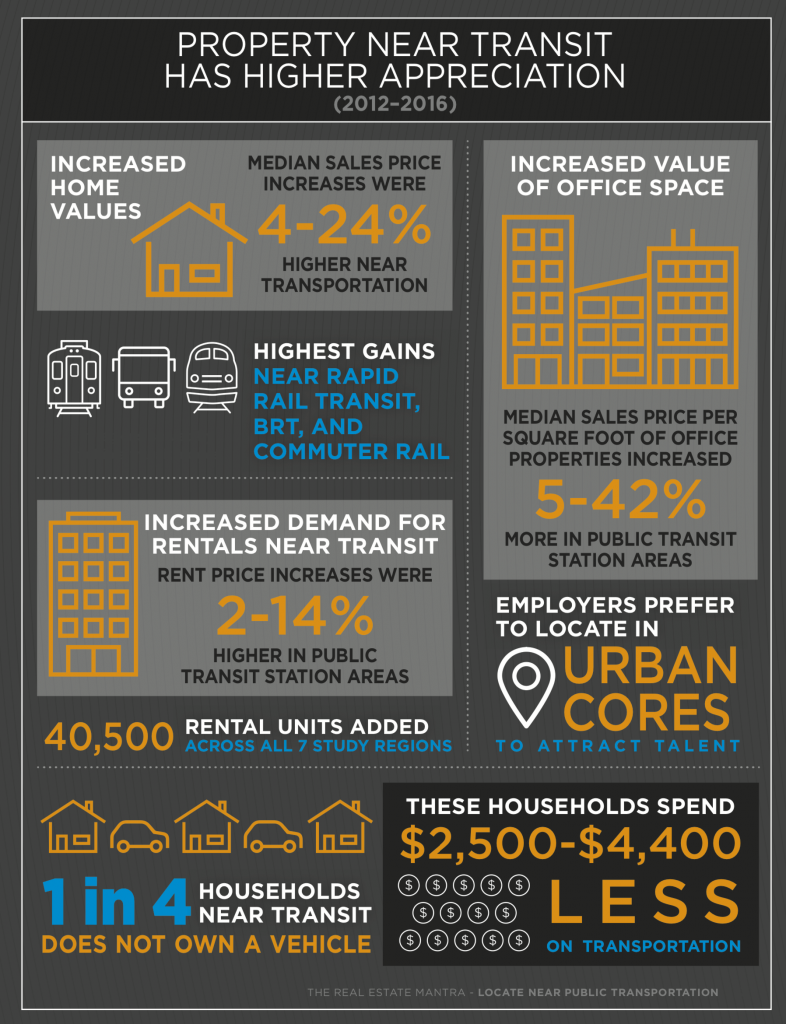